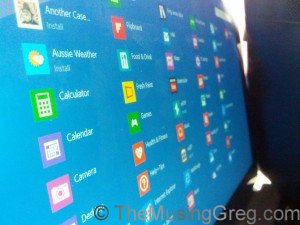 As far as I can tell the only thing which has persisted across both devices (based on when the first one started failing) are the Touch Cover and my user profile. I’ve already noted that disconnecting the cover while faulting doesn’t make the fault go away on this second device; I’m yet to determine if having the touch cover disconnected on an ongoing basis prevents it occurring in the first place. So that will be an ongoing project.

But at this point my focus is on my user profile. Could there be some corruption in my profile, or in an app I’ve got installed, which is leading to this fault? I would think it unlikely but I’d like to be able to rule this out – after all I’m running the same user profile on this device, and the same apps (or at least a subset of these) are installed so there’s definitely some commonality. I should say that as this was my first MS device my Microsoft account was freshly created on the first device so the problem can’t be from some pre-existing profile bug. I’ve activated the guest account and next time the device faults I’ll be switching to that account (if the touchscreen lets me!) to see if that stops the problem.

What I’m interested in at the moment is whether it’s related to an app I may have installed, and whether there is any third-party app commonality between me and anyone else having this problem. So here’s the list of apps I’ve got installed from the Windows store:

Currently NOT installed but still in my profile, but possibly installed while first device was faulting:

Currently NOT installed but still in my profile, only installed on first device after faulting:

Are you having this problem? If so, do you have any of the apps installed from the first two lists?

EDIT May 8: The device has just faulted. I was playing offroad racing, switched back to the home screen and tapped in the top left corner (this seems to sometimes have some effect in bringing it on), and it started registering phantom touches. Switched to the guest account, still going. Switched back to my account, still faulting. Closed all apps, even checked Task Manager and no running apps, but the problem still persists. Logged OUT of my account and STILL faulting. Touch keyboard, no change. Power plugged back in, no change. Screen off for 60 seconds with no keyboard or power connected, back on, suddenly the problem’s gone.

EDIT May 14: A single test while the unit was faulting has determined that after between 9.5 and 10.5 seconds of the screen being turned off, the problem went away. This appeared to happen at the same time as the keyboard backlight went out. I will continue to monitor and evaluate this.

8 thoughts on “Surface 2 screen saga – do you run these apps?”