I recently purchased a Giandel 1200W Pure Sine Wave Inverter for our caravan, and spent extended time testing it under a variety of load conditions.

Inside the box you get:

From there it’s a simple matter to switch it on with the power button and add your load.

I tested the following loads:

In each case I had the inverter running before I turned the load on. Throughout the tests I monitored the shape of the waveform to confirm whether or not it was a pure sinewave or not, and also at various times monitored either the input current, the battery voltage or the inverter output voltage. 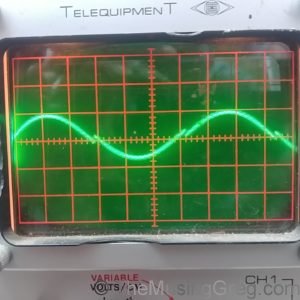 The key great result was that the waveform remained clean throughout the test. It wasn’t a perfect sine wave – you can see some cross-over distortion where the positive half of the waveform stopped and the negative half started. Presumably this is where the positive transistors turn off and the negative ones start; but this is still probably cleaner than a normal mains supply and it seemed to improve as the tests progressed.

The Makita heat gun test was very challenging for the inverter as the pulse-width modulated output meant the load was changing multiple times per second. However this never interfered with the quality of the waveform.

Another thing I liked about the inverter was that while the fan was a little noisy, it only ran when the load increased. So most of the time it was off, and thus very quiet. 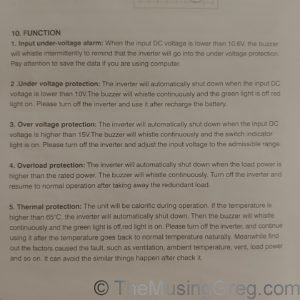 Another minor quibble is the 1A standby current – a little high I feel; and also that one of the mounting cut-outs is right under the negative battery terminal so it’s very hard to access with a screwdriver.

The Giandel 1200W pure sine wave inverter is a recommended product. It’s great value, lightweight and was able to hold a clean waveform. I feel its power rating may be slightly more than what it can supply – it was able to power the 1200W heat gun but not the 1200W microwave or the 0-2000W heat gun when only on setting 2 out of 5. So if it can supply 1200W at all, that seems to be the absolute limit with no margin of error, so consider a 1500W inverter if you’re expecting this to run a 1200W device.

However it otherwise performed very well and is a great choice for camping or travelling.