Kids are always a mixture of joys and challenges.

Our 8 year old daughter is a typical oldest sibling who’s capable of putting her two little brothers (6 and 4) in their place. I guess sibling rivalry is part of growing up, but we’ve been seeing a bit too much recently and eventually the teasing and bickering hit flash point when things started getting physical.This precipitated our first ever family conference where my wife and I explained what we expected of them (which wasn’t new to them) but how we were a team all working together and that if they wanted a kind family they each had a big responsibility to contribute (which probably was). Kindness and harmony isn’t something Mum and Dad scatter around the room like fairy dust; it’s the result of each individual in the family choosing to be kind, to be caring, to “esteem other better than themselves” (Philippians 2v3), and to do unto others as you would have them do to you. We asked if they thought God would be happy with the behaviour He’d seen, and if they were comfortable with that.

For a while, things really seemed to look up. The arguments were immediately less and they were clearly making an effort to do better. The rivalry was still there, but to a lesser extent.

A few weeks later our youngest managed to poke himself in the eye with a stick while tidying up before bed. He fairly screamed the house down so we knew he hadn’t just bumped his toe! There were a tense few moments when we realised what had happened and tried to determine how badly he was hurt. But what surprised us most during this was when his two older siblings, with whom he’d been arguing a minute earlier, burst into tears themselves!

Any parent in our situation will know why my wife and I lapped this up. This was perhaps the first time we’d seen sufficient concern between our kids to elicit that sort of reaction at seeing the other in pain. 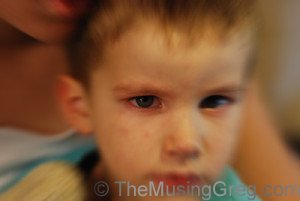 In the end he was absolutely fine, life went on and the bickering started again. But it was nice to have them pull back the curtains on their hearts for a few moments and show reveal a definite kernel of love and care beneath the veneer.